The 172 metre long Zenobia Wreck is the best wreck dive in the mediteranean and one of the best dive sites in the world. Often referred to as the Titanic of the med the Zenobia is regularly voted as one of the top 5 or 10 wreck dives in the world, dive her for one day or a week and you will see why. The Zenobia sank to the sea bed in the early hours of the 7th June 1980. She rests on her port side at a maximum depth of 42m (45m inside) and her starboard side sits at 16m at it's shallowest.

The Zenobia was a ro-ro ferry on her maiden voyage from Malmö, Sweden to Tartous, Syria and was fully laden with over 100 Lorries and trailers. Also on board were forklifts, tractors, the captains Lada car and masses of pristine cargo. Everything was going well on the journey and she passed through the straits of Gibraltar heading to Crete and then Athens. However enroute she started listing to port and it was found to be a computer ballasting problem pumping excess water into her port side ballast. This was thought to have been resolved in Athens but then the problem reoccurred and became worse, the Zenobia had to be taken into the port of Larnaca. Larnaca port then had to tow her out and away from shipping lanes as the problem could not be resolved. At 2.30am the Zenobia capsized and sank just under 1 mile from shore on her port side with a cargo then valued at over £200,000,000.

Since then various conspiracy theories have emerged including insurance fraud, espionage, a cache of arms onboard, and to add to it further the Captain unfortunately committed suicide soon after.

At Cyprus Diving Adventures we have been diving the Zenobia for over 12 years and know the wreck very well, we are experienced enough to consider ourselves Zenobia specialists. The Zenobia wreck and an area surrounding it are now an official marine reserve and therefore fully protected. It has become a haven for a range of fantastic marine life including turtles, barracuda, large grouper, tuna, jacks, moray eels, large shoals of breams, trumpetfish, triggerfish, nudibranchs, lionfish, a variety of wrasses and so much more.

The sheer scale of the wreck means that there are so many different dives to enjoy and you can explore all areas of this amazing dive site. The outside of the wreck has so much to see with the 2 massive propellors, roro doors, the lorries on the outside, funnels, bridge, cafeteria, the bow area and the accommodation. One of the reasons that the Zenobia is so popular is due to a number of excellent, safe penetration dives that are available. With open areas to easily exit, lots of ambient light and no problems of the easy penetration dives suffering from silting up these dives are open to most divers.

For deep and technical divers there are a range of dives on the outside to further explore what the Zenobia has to offer towards the seabed, and many penetration dives deeper into the decks and bowels of the wreck. The 3 lorry decks are full of cargo, each one different to the other and from all corners of Europe, Arabia and Africa. Dives are also made to the Captain's quarters, launderette, deeper into the accommodation and the engine room.

With the depth of the wreck sitting in 42 metres of water and up to 16 metres at her shallowest she is at the perfect depths for a whole range of diving and experience levels.

You really can dive this wreck for a whole week and still not see it all !!

The Zenobia is also the perfect location to complete your Advanced Open Water course and a range of TDI and TecRec courses.

The dive boat leaves for the Zenobia every day in the summer and 2 to 3 days per week in the winter months. The dive boat has all amenities on board, includes hot & cold drinks, toilets, a deck for relaxing and a BBQ lunch onboard one of the dive boats after the dives.

Non divers are also welcome to join you on the trip. 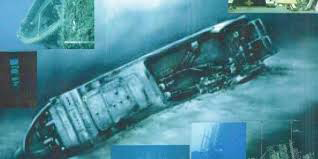 "Where Every Dive is an Adventure"