Right from the very beginning as new student divers we start to learn about safe ascents, what it means and why we need to ascend correctly. This is a key skill that every diver needs to have, the ability to properly control how they ascend either to a shallower diving depth or when we head to the surface at the end of a dive.

Every diver knows that as we dive we start to absorb Nitrogen from the air we breathe. As we dive deeper we absorb more due to the increasing pressure and we also absorb more the longer we dive for. There are accepted levels of what we can safely hold in our bodies and this is measured with dive table or computers to ensure we do not exceed our limits.

We often take a lot of care of our no decompression limits (NDL) but what about our ascents when we finish the dive ? One of the biggest errors that we witness with many divers is the speed and the way in which they ascend. It is almost as though all that training and drumming on about slowly ascending from every dive just does not mean anything anymore. So why do so many head up so quickly ?

A good, safe ascent rate is no more than 6 to 9 metres per minute, the slower the better especially after a deep dive or a series of dives. Divers should be ascending at a nice leisurely ascent rate watching their computers ascent rate monitor now and again, have nice easy breathing, a controlled rate, a good diving position, and still have plenty of gas to correctly complete the safety stop and final ascent. These are the main components of a proper and safe ascent after every dive. 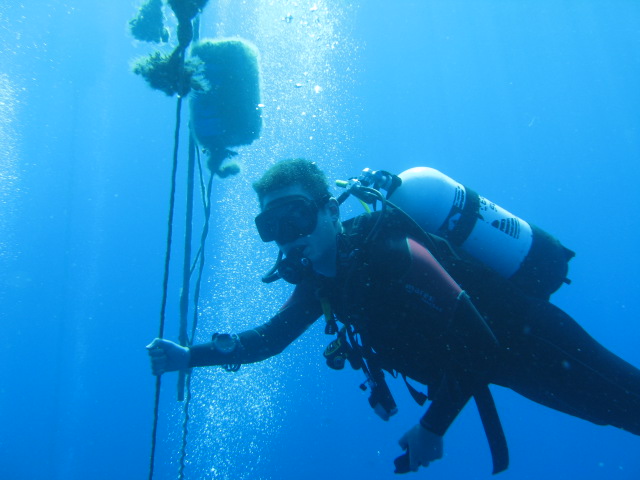 So where does it go wrong and why do we see divers struggling to ascend, ascending too quickly, getting low on air or generally just causing chaos on the way up the line ?

It all starts with training, experience and diving ability. A diver that has not been trained correctly or maybe has not dived for a while or is lacking in experience can find themselves getting stressed while trying to ascend correctly. Maybe their buoyancy control is not what it should be, they have forgotten to fin on an ascent and then maybe due to all this anxiety their air is getting lower than it should as they breathe more heavily and they just want to get to the surface as quickly as possible. Sometimes the simple skill of ascending in a controlled manner gently finning upwards and venting air from the BCD to control the rate of ascent can seem a difficult task when they feel the lack of ability and control and then anxiety levels begin to mount. Often divers are negatively buoyant before they start their ascent so feel they are struggling to ascend and air is being used at a high rate due to this. Even holding a safety stop at 5 metres for divers in these situations can be a hard task.

Those that leave their ascent to the surface too late at the end of a dive and their air is low can be forced to ascend quicker than they should. How often do you see buddy pairs on the alternative air source on an ascent line due to this ? This is bad diving and divers should always leave the end of the dive with a good reserve of air so they can complete a nice slow ascent, a full safety stop and the final ascent with plenty of air still left in the tank. These are basic diving principles but so many divers either forget them or are ignorant towards them. You should always allow at least 20 to 30 bar of air for your ascent and safety stop depending on the depth, more if you are ascending from very deep depths. This should always be factored in and individual breathing rates also have to be accounted for.

So never underestimate the importance of safe ascents while diving. Never dive beyond your personal limits and get some refresher training if you seem to struggle with your ascents. The finish of a dive with the final ascent should be every much as enjoyable and as controlled as the rest of the dive, and remember the safety aspect of this primary skill too. Ascend slowly from every dive, perform a proper safety stop or stops and never be in a rush to finish the final 5 metres.

Get your ascents right and you will enjoy problem free diving and some of the best diving experiences completing your ascents.