Many people ask us if there are many other wrecks in Cyprus apart from the Zenobia. The Zenobia is obviously one of the main attractions for divers visiting Cyprus, and rightly so she is a truly fantastic wreck to dive, but there are also numerous other wreck dives to explore all around Cyprus.

From the latest two wrecks off Limassol to the oldest wrecks in Cyprus, and to the new wrecks planned for the future there are a range of dives to suit all tastes and experience levels.

We are compiling a list of the best with locations, information and details. We will also post updates of any planned and new wrecks to be sunk as diving wrecks and artificial reefs as they happen.

As we have detailed on a number of posts the Zenobia is one of the top wreck dives in the world with fantastic marine life, loads of interest with so much cargo still intact, great penetration dives and a haven for recreational and technical divers alike with a range of superb dives.

Two of the newest wrecks in Cyprus are known as the Limassol wrecks, the Constandis and Lady Thetis. These have been sunk to promote diving tourism in the area and are designated marine reserves. Sank just over 2 years ago they are 200m apart with an artificial reef now also lying between them. They are great wrecks to penetrate with lots of interest and the numbers and range of marine life has exploded over the past 12 months. They are a testament to what can be achieved by purposely sinking these wrecks and developing protected reefs.

They lie in 24m and 19m respectively and are great dives. The Constandis was a Russian deep sea trawler that fished the sea bed and was until recently working in the eastern med. The Lady Thetis was built in Hamburg, Germany and was a river pleasure cruiser. There are 3 levels to explore on this excellent wreck.

Next to the Zenobia is the little known wreck, the Alexandria. An old fishing boat in 30m of water she is well worth a visit. Full of bright cardinal fish the inside is awash with colour and some interest. Large shoals of barracuda and amberjacks can often be seeing patrolling the waters around the wreck waiting for their opportunity to pounce on the thousands of bait fish swarming around the wreck. She is well worth a dive and can be partially penetrated.

The Achilleas is located off Paphos and has been on the bottom now for over 40 years. A Greek vessel that mysteriously exploded in 1975 and sank in 11 metres of water. She lies upside down in three sections. The bow of the Achilleas has a lot to see underneath it and the stern that has been ripped open so divers can easily look inside. The bronze propeller is still in place and the engine can also be seen. A lot of marine life lives in and around this interesting wreck and with the depth a very long dive is possible to explore the area.

Wreck of the Vera K

A very interesting wreck covering a large area and located off Paphos. The Vera K was blown up in 1974 as it was seen as a shipping hazard and so the majority of the wreck lies in a massive crater with a maximum depth of 14m. A Lebanese freighter originally, she ran aground in shallow water and was then used as target practice by the Cypriot military. Bullets can still be found strewn around the area. A haven for a variety of marine life and other interest includes the bridge, the freighters remaining shell and a colourful natural archway of rock.

The Liberty Wreck is another purpose sank wreck for the development of diving tourism. She will also form part of a marine reserve with the nearby Nemesis III. Sank in 2009 she lies in a depth of 18-27m and just 1km off the Protaras coast. An easy wreck to penetrate she was a Russian cargo ship with an overall length of 37m and the visibility is excellent in this area.

Turtles, rays, triggerfish, schools of jacks and much more marine life can regularly be seen on this wreck.

Not far from the Liberty wreck the Nemesis III wreck lies in 24m of water and was the latest to be sank in 2014. There is some easy and very interesting penetration on this wreck and the marine life is now really starting to colonise the Nemesis. Visibility is regularly 25-30m around this old fishing trawler that was built in France in 1956 operating in the eastern med and Libyan waters.

The HMS Cricket is an old WW2 British gunboat of the Insect class. It was anchored in Larnaca Bay and used by the RAF for target practice after being badly damaged in an attack in 1941. During bad weather in 1947 she sank and lies upside down in 27m. There is a sandy dip underneath the wreck which can be dived through. Divers can also dive within the hull, through escape hatches and under the wreck. Maximum depth in the sandy dip is 33m.

HMS Cricket was an Aphis Class Gunboat constructed during the First World War and deployed among other places on the River Danube. Due to be scrapped in 1939 she gained a reprieve by the outbreak of the war.

Now used exclusively for divers she is a great dive with lots of interest and a range of superb marine life. 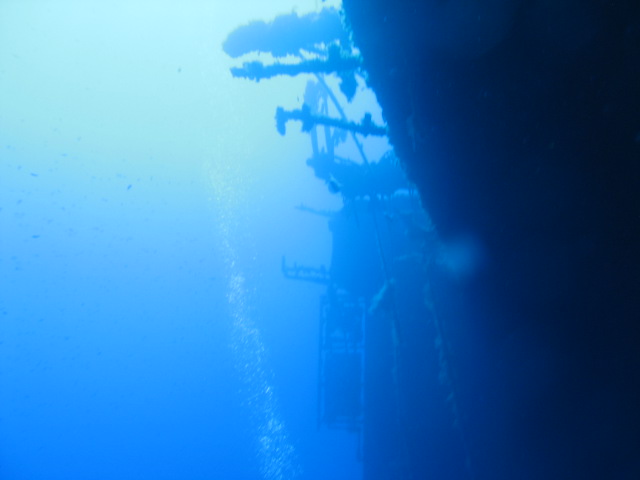