Lionfish arrive on the Zenobia

A lot has been written and discussed recently about the invasive marine species coming from the Red Sea, through the Suez Canal and into the eastern meditteranean. These have been generally welcomed by divers and dive centres who have enjoyed this additional colourful marine life to Cyprus waters, and with no harm to the populations of local species.

The topic of all conservations now is the Lionfish. This fish has a fearsome reputation and is renowned throughout the world for it's population explosions and the impact on the local marine life and eco-systems. In recent years it was first spotted off the eastern coasts of Cyprus around Protaras, Cape Greco and Agia Napa. In the last year or two we first saw a Lionfish on the Zenobia wreck in Larnaca and this year on the Limassol wrecks. They were initially a welcome visitor as they are a very attractive fish to dive with but in recent months there is growing concern about their increasing numbers.

The problem is that they can reproduce and spread so quickly and do not have many predators, even humans. They spawn about every 4 days and lay millions of eggs every year to flow freely on the oceon currents and so spreading far and wide. In other parts of the world authorities, sometimes too slowly, have been implementing fishing programmes to promote the capture of Lionfish. They have also trained local dive centres to trap and kill as many as they can. Restaurants have also been advised on how to prepare and cook Lionfish and many now serve them and they are apparently delicious.

Here in Cyprus however we recently noticed that the Lionfish on the Zenobia wreck and on the Constandis wreck in Limassol had disappeared. On both wrecks there are many very large Dusky Groupers and we were told that a particularly large one on the Constandis was seen eating a Lionfish ! Apparently it takes the lionfish head first so to flatten the poisonous spines and can even shed them in this way. So maybe the same has happened on the Zenobia.

Divers, Dive Centres and the Cyprus authorities will be keeping a close eye on the Lionfish population but it is nice to know that the magnificent Grouper is keeping an eye on things for us too ! 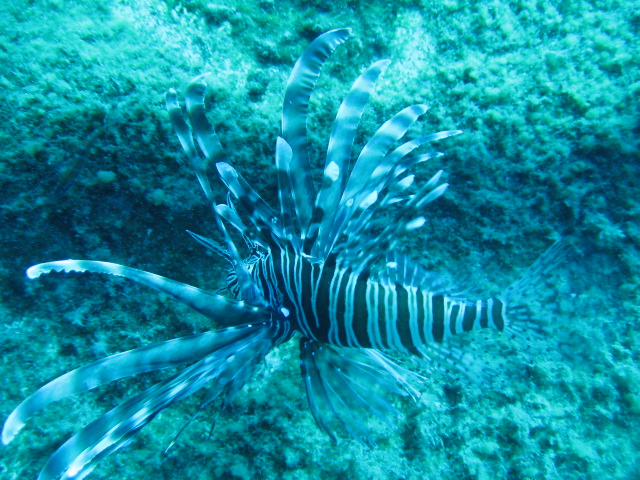