Here are a number of facts that you may or may not know about diving in Cyprus;

Cyprus has over 50,000 visitors every year who go diving in some form or another.

The coastline of Cyprus has been awarded more blue flag awards for the cleanliness of it's sea and beaches per capita and coastline than anywhere else in the world.

Cyprus is home to the 'Titanic of the Mediterranean' - the Zenobia wreck.

Underwater visibility is typically 20 to 40 metres and the sea never gets lower than 17degC in the winter. Summer water temperatures can reach 30 degrees.

Cyprus is home to many ancient wrecks and ancient amphora, artifacts and anchors can be found on many dives.

The sea off Pissouri is home to the biggest reef in Cyprus, with the deepest known and largest cave for divers.

Apart from the Zenobia there are a further 12 wrecks around Cyprus for divers to explore.

There are over 80 dive sites across Cyprus from Polis and Paphos in the west, Pissouri and Limassol in the South to Larnaca and Cape Greko in the east.

To date there are over 250 fish species in Cypriot waters and Cyprus is home to the greatest diversity of marine life in the mediterranean.

On average there are over 800 turtle nests on Cyprus beaches every year with many more individual turtles visiting our waters every summer,

8000 baby turtles are released into the sea every year from the Lara Turtle Hatchery alone on the Akamas south west coast. 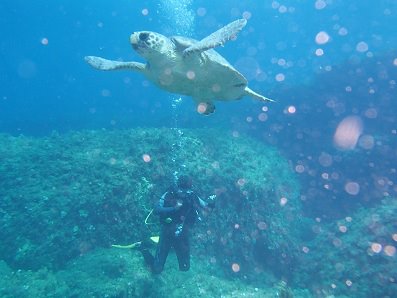 The relative isolation of Cyprus in the eastern med has resulted in the evolution of several endemic species including the rare Mediterranean Monk Seal.

There are 5 protected marine areas in coastal waters and a further number of reef marine reserves. These can be in open water or supported by artificial reefs.

Original species in Cyprus waters were from the Atlantic Ocean, since it opened in the 1950's hundreds more have now populated Cyprus waters from the Red Sea via the Suez Canal.

Abundant seagrasses form oceanic meadows on the sea floor that turtles love to feed on. The Posidonia (sometimes called Poseidon) grass is in fact the only flowering plant that has migrated into the sea and has evolved to flourish underwater over centuries.

There are a number of sharks in Cyprus waters but sightings are rare as most are in deeper waters.

Those sighted in recent years include the Mako, Basking and Blue sharks.