Spring and Summer Season in Cyprus

There is plenty of winter diving in Cyprus with this period generally considered from the end of December through until the start of March.

Diving in Cyprus has something for everyone all year round but generally most people start to think about getting back in the water from the Spring onwards.

Weather conditions in the Spring and Summer are gloriously sunny and the water really starts to warm up from April. Sea temperatures can quickly rise to 20degC and to the mid twenties by as early as May. June and July then slowly get much hotter and the sea temperature can easily be 30degC in places during August. These temperatures then only slightly ease off with October maintaining a temperature of about 27degC and November going from 25degC to 22degC as we get to the end of the month.

March and April are also the best months to see turtles coming into the shallower waters to mate and then lay their eggs in the early summer.

As the spring moves into April we see more and more divers entering the water, more dive boats are available as they come out of their winter harbours and more people are looking forward to warmer waters. 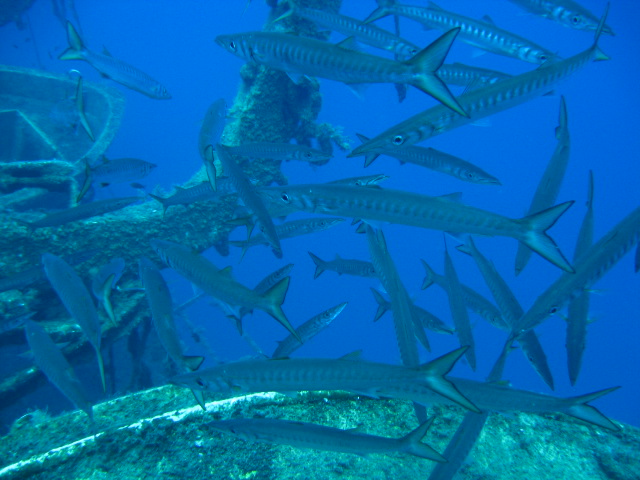 During the Spring and Summer the visibility on the dives generally improves from the hit and miss of the winter where conditions are less predictable. The dives gain a richness in colour from the higher sun levels and the sea is crystal clear and you see more of the deep blue water that most divers expect in Cyprus. Visiibily can be up to and over 30 metres in places.

The marine life and it's behaviour also changes during the Spring and into the Summer. Creatures that prefer colder water move into the depths and make way for the warmer water species who also begin to reproduce in the calmer waters.

The Winter currents that can be quite strong generally get a lot calmer too over the summer and the species that enjoy these currents make way more for those that thrive in less current and warmer waters.

By June to October the summer diving season is in full flow with thousands of divers enjoying the great diving across the whole of Cyprus. This can continue into December and even over Christmas the conditions are good enough for warm water and great visibility before the main winter months kick in again.